Is it possible to design a space that has more than three dimensions? Experience PhD student Constantinos Miltiades has a long history of transcending spaces both physical and virtual. Miltiades is making research on spaces that have no physical-world equivalent and are “unhinged from the principles of Euclidean or Cartesian space”. These environments are impossible to construct physically but can be experienced in virtual reality. His on-going research is based on the multidisciplinary literature on the matter and aims to construct an actual VR experience to explore the topic further. “My hypothesis is that these particular virtual environments can uncover latent design potentials and capacities for spatial perception and cognition”, Miltiades projects. 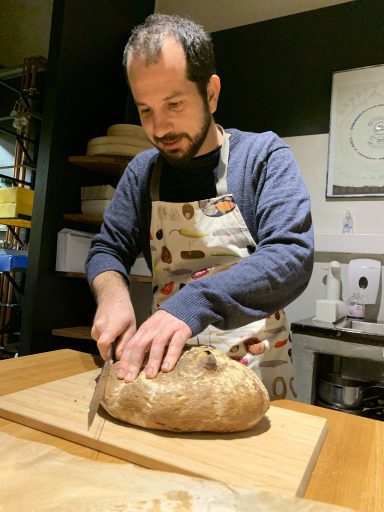 IN BETWEEN DIMENSIONS OF RESEARCH DISCIPLINES
“The research on VR experiences is tricky since it requires multiple diverse domains of knowledge, as well as different sets of practices”, Miltiades says. His theoretical approach includes most prominently the fields of architecture, game studies and experience research. Miltiades also lists mathematics, philosophy and history of science and technology as his sources of literature. In practical terms, he is developing VR prototypes of non-Euclidean navigable environments through a non-conventional use of game engines. In the final experimental part of the PhD-studies, he plans to perform experiments to study subjects’ experience in these virtual environments and obtain relevant data. “There is much more to VR than the simulation and imitation of reality,” Miltiades believes.

RESEARCHER IN RECESSION
Miltiades started his studies from architecture in NTU-Athens and learned programming as well as a means of experimental design research. He developed software for an interactive structure for his thesis, which “went better than I had imagined”. He ended up writing a conference paper about his thesis project. Yet, as many other architecture graduates at the time, Miltiades faced the bleak employment horizons left by the 2008 financial crisis to Greece and his home country Cyprus. In 2013, Miltiades was accepted to pursue a post-graduate degree on philosophy and computation in the university of science and technology ETH Zurich.

VIRTUAL WAVE IN RISING
Surfing on the wave of emerging VR technology, Miltiades started experimenting with smart-phone VR in a research team at ETH. Over the years they developed interactive gloves and motion tracking sensors among other technologies that would allow for full-body ‘immersion’ in a multi-user virtual environment. This project was pivotal for Miltiades and motivated him to pursue the research further: “It showed me that there was much more to the spatiality specific to virtual environments which were promising to investigate.”

MUSICAL TRACK
in 2015, Miltiades moved again, this time to Austria to take up an assistant position at the Institute of Architecture and Media of TU Graz. There he continued his research while also developing a curriculum and teaching virtual architecture in master studios. Miltiades also studied computer music for a year at the Institute of Electronic Music of KU Graz after he had discovered his ”particular affinities with artistic research in acoustic space and spatial audio”, as he himself puts it. “I had the honour also the pleasure to collaborate with artists and scholars of fields far from my own background and contribute in domains like game studies, digital humanities, visual arts, music and so on.”

NORTHERN DIMENSION
Last year, for a 4th time in a decade, Miltiades moved again, this time from Austria to Finland. “It was rather difficult in terms of leaving very many close friends”, he admits but continues that adapting to an altogether different setting was easier than he had expected. Catalytic to that Miltiades mentions the colleagues at the doctoral school, the study programme as well as the overall Aalto ARTS environment.

In his role as a student representative to the Doctoral Programme Committee, he has been active in establishing channels of communication between doctoral students in the Corona-year. Even if the covid-19 has taken its toll on him as well others, he has seen it important having meetings between doctoral students, “primarily to check with each other during this first stretch of isolation”, he explains. Coming to the end of 2020, Miltiades says he will not be easily surprised about anything anymore: ”If anything, perhaps the insistence of what Mark Fisher termed “capitalist realism”, also the full-fledged expression of post-factuality”.

Thanking all of his colleagues he has worked together with over the years, Miltiades is humble for the chances he has received in his multifaceted research career. “I have been fortunate so far to be around interesting and stimulating people, and lucky to be offered paid positions to pursue my research, which is not common, unfortunately, especially for young researchers”, Miltiades says gratefully.

The Finnish Academy’s Profi4 -funding has enabled Aalto to profile in multidisciplinary experience research. With this funding, six interdisciplinary doctoral students strive to create new scientific knowledge about human experiences. The topics touch the psychological and brain mechanisms of experiences, shaping experiences via art, design and architecture, and the organizational, managerial, and emotional aspects of experiences.

This is a unique website which will require a more modern browser to work!